Gladiator Polo is yet another brilliant marketing masterpiece by equestrian powerhouse Mark Bellissimo, as he continues to bring all equestrian sports to enthusiastic spectators in Wellington and beyond.

Think of it as a cross breed of Polo, Ice Hockey, and Box Lacrosse. This is a high-speed game played within an enclosed arena, with 3 players on each team and non-stop continuous play.

Here’s a brief description of the competition from the Gladiator Polo website:

Gladiator Polo is a professional arena polo league that combines the world’s best polo players with modified rules that keep the play fast.

The event is played in a ring with all-weather footing that is approximately 300′ x 150′ which is 1/10 the size of a typical grass polo field. There are three players on each side. The Inaugural Gladiator Polo League will have prize money of $250,000, which is the world’s largest polo purse, and will be played over six Thursday evenings with a final $50,000 final game for the two highest ranked teams.

There are 4 teams (consisting of 3 players each) battling it out throughout the season, which runs from January through April, with matches on Thursday nights.The teams are fielded with international high goal polo players, and the team names reflect their Roman influence; Spartacus, Crixus, Priscus, and Spiculus.

The series has also grabbed the interest of the local and national level media outlets.NBC Sports provided live coverage at the February 28th tournament, with Triple Crown racing commentator Kenny Rice accompanying hall-of-famer and 10 goal player Adam Snow, calling the play by play action. Rice is a recognizable voice from televised thoroughbred racing, while Snow is world renowned for his success as a high goal polo competitor.

Snow, a well-known personality on the polo circuit for at Palm Beach Polo, has recently diversified his professional focus within the polo world.After decades of traveling throughout the US and the world to compete in high goal matches, Snow now is a sought after clinician, sports commentator, and author. His book, Polo Life, Horses, Sport, 10 and Zen, co-authored with wife Shelley Onderdonk, perfectly captures the essence of the equestrian sporting life.

Get a taste of the action by watching the playback of the February 28th Gladiator Polo match, color commentated by both Kenny Rice and Adam Snow. 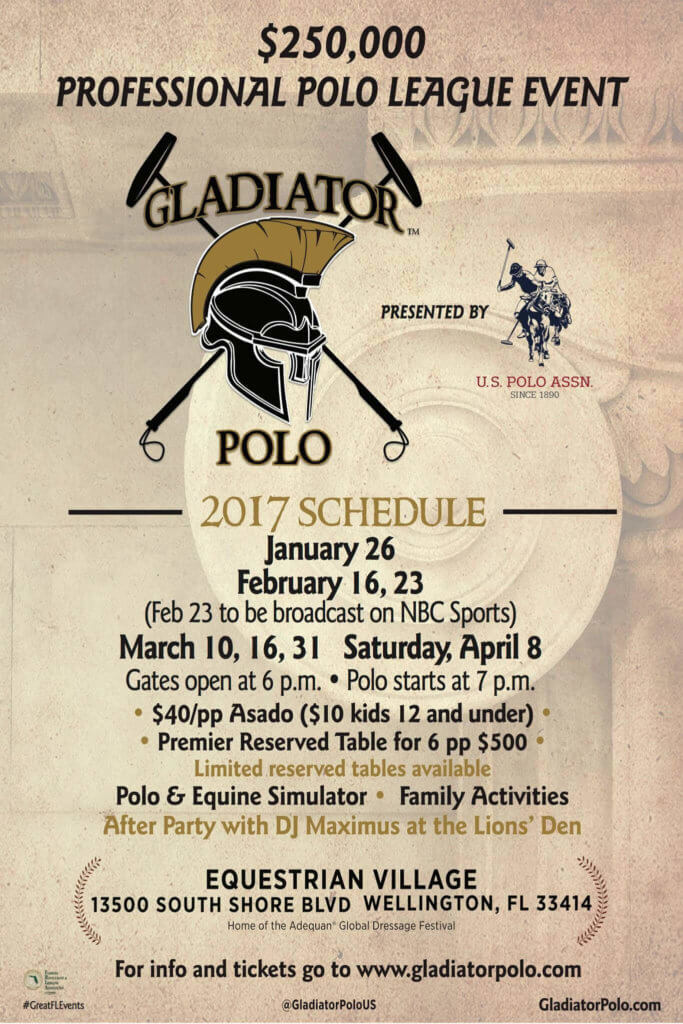 Bellissimo, a managing partner of the International Equestrian Group, has a passionate interest in the sport of polo.

As a result, the Gladiator Polo Series boasts top international level competitors and an impressive series prize purse which has grown from $100,000 to $250,000 in this first season. Aimed to attract crowds of spectators, there’s plenty of Roman themed entertainment.In addition to the main Gladiator Polo match, there are junior gladiators playing at intermission, gladiator games and music in between chukkers. Spectators have a choice of free general admission or VIP ticket options with various dining choices and live music at the after parties.

The following excerpt is from the initial press release on behalf of Mark Bellissimo and the International Polo Club:

As the popularity of the event grows, Bellissimo is confident that there is a sustainable longevity for arena polo in Wellington, and it will have a home each Thursday evening during the winter starting in 2018.

For many years Wellington has served as the winter hub for equestrians around the world, and the addition of arena polo will provide world-class equestrian sport from Thursday to Sunday during the high season. Adding to an already strong weekly schedule featuring the “Friday Night Stars” FEI Grand Prix Dressage Freestyle at The Stadium on Friday evenings, “Saturday Night Lights” Grand Prix Show Jumping competitions at PBIEC on Saturday nights, and concluding with high-goal polo at the International Polo Club (IPC) onSunday afternoons. Gladiator Polo will entertain audiences and begin the equestrian weekend on Thursday with action-packed family fun!

There are still two Gladiator Polo matches left this season, Spartacus vs Priscus on March 31st and their Championship game on April 8th, so come join the Wellington Equestrian Realty team for a unique evening of polo and entertainment!